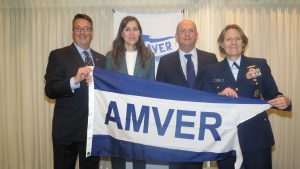 Carnival Cruise Line was presented with an Automated Mutual-Assistance Vessel Rescue System (AMVER) Award from the U.S. Coast Guard recognizing the cruise line’s role in aiding mariners in distress. The award was presented earlier this week at a reception held at the National Press Club in Washington, D.C.

The AMVER System, sponsored by the U.S. Coast Guard, is a computer-based voluntary global ship reporting system used worldwide by search and rescue authorities to arrange for assistance to persons in distress at sea. The AMVER Awards Program was inaugurated in 1971 to recognize those vessels which regularly participate in the AMVER System and assist others in distress at sea.