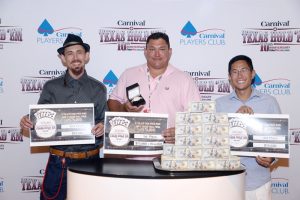 Terry Riley of Forsyth, Ga., is the winner of Carnival Cruise Line’s 10th annual PokerPro Challenge held recently on Carnival Dream, capturing the top prize of $75,000 cash. Riley beat out more than 500 other entrants on board who competed in a series of Texas Hold’em card games utilizing state-of-the-art electronic PokerPro tables from Jackpot Digital.

In addition to the cash prize, Riley received a commemorative winner’s bracelet and, as the 10th anniversary winner, was awarded a coveted seat, including the $10,000 buy-in, at the World Series of Poker Main Event, the largest and most prestigious poker tournaments in the world, all courtesy of Carnival

Riley said that winning the PokerPro Challenge was a highlight of his poker-playing career and that earning a spot in the World Series of Poker fulfilled a lifetime dream.  “Never in my wildest dreams would I imagine that I would win one of the largest casino tournaments at sea and earn a spot at the WSOP to compete with the best poker players in a world,” he said.

“On behalf of Carnival Corporation, we’d like to extend our congratulations to Terry for his exciting win and let him know we’re rooting for him in the WSOP.  We’d also like to thank our friends at Jackpot Digital for their outstanding partnership to pull off an event of this magnitude.” Stated Marty Goldman, Carnival’s senior vice president of global casino operations

Jackpot Digital President and CEO Jake Kalpakian added, “We are very happy with the success of the 10th annual PokerPro Challenge, and we are looking forward to the tournament next year with our partners at Carnival. Congratulations to Mr. Riley, and best of luck at the WSOP Main Event!”

To be eligible for the tournament, more than 3,500 players participated in satellite tournaments over the past year held aboard Carnival ships. Each satellite winner took home first prize of up to $1,000 and earned a seat in the Grand Final Tournament aboard Carnival Dream.   Over the past decade, Carnival has awarded more than $1.7 million in winnings for the PokerPro Challenge.

The next Grand Final of the Carnival PokerPro Challenge is scheduled for August 2018 aboard Carnival Breeze.