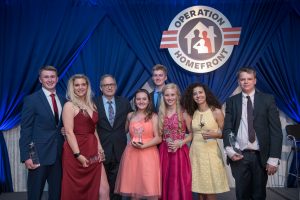 Carnival Cruise Line is proud to participate for the third year in a row in Operation Homefront’s 2018 Military Child of the Year Awards Ceremony held yesterday in Washington, D.C.

Operation Homefront is the national non-profit that builds strong, stable and secure military families and organizes the annual awards event.  A Military Child of the Year is chosen by each branch of the military based on resilience and strength of character, thriving within the challenges of military life as well as leadership within their families and their communities.

Additionally, Shelby Barber was the recipient of the third annual Award for Innovation. This award is presented to a military child who has designed a bold and creative solution to address a local, regional or global challenge.

As part of this year’s event, Carnival’s Senior Vice President of Hotel Operations Richard Morse presented each Military Child of the Year honoree and their family with a complimentary cruise to the Caribbean from one of the line’s North American homeports.

“Carnival Cruise Line has always been a big supporter of military families and I’m proud to say that we carry more active and retired military personnel than any other cruise line in the world,” said Morse. Carnival hosts military tributes on board every cruise across the fleet. “We take great pride in showing our appreciation for those who serve, and one of the ways we do is through our partnership with Operation Homefront.”

Carnival has partnered with Operation Homefront on a number of fundraising and awareness initiatives. Last July 4, Carnival hosted the world’s first “social media powered barbecue” for military troops at the Marine Corps Air Station Miramar in San Diego. The unique summertime feast featured burgers with buns that were lasered with heartfelt messages of thanks to service members. In 2016, hundreds of military families were welcomed aboard Carnival Vista prior to its inaugural sailing from the U.S. as the culmination of a year-long campaign called Honor.Family.Fun that helped raise funds and awareness for Operation Homefront.