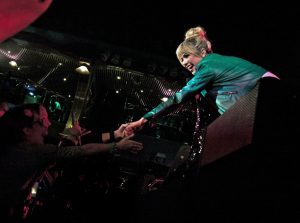 The captivating performance, which was free and open to all guests sailing on the voyage, was part of the line’s Carnival LIVE Concert Series which brings the best in live entertainment to the seas with concerts by top artists in a unique and memorable setting.

Jepsen performed songs from her major label debut Kiss that included the Grammy-nominated “Call Me Maybe” as well as her hit album E·MO·TION which received critical acclaim and featured the Billboard Top 40 hit “I Really Like You.”

Jepsen is the latest in an impressive lineup of Carnival LIVE artists who run the gamut of musical genres, from rock, country, R&B, and pop, as well as some of the biggest names in comedy.  Previous Carnival LIVE artists include music superstars Nick Jonas, Tim McGraw and Carrie Underwood and comedians Jim Gaffigan and Chris Tucker.